Hear It in Our Voice 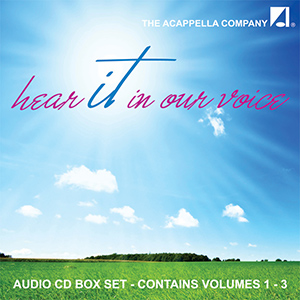 *Digital purchase links received through e-mail cannot be downloaded directly to any mobile device, including cell phones and tablets.


*Digital Albums include music tracks only.

*Digital purchase links received through e-mail cannot be downloaded directly to any mobile device, including cell phones and tablets.

Important Notice: By making digital files available for download, we are trusting that you will abide by copyright laws and kindly ask you not distribute files in any way. These files are for personal use only and must stay in your possession. Thank you for understanding and abiding by the law.

Special Premium! We brought back the popular Hear It in Our Voice series as a digital box set. Originally released in the mid-1990s as curated collections, these albums reflected some of the most popular songs ever produced by The Acappella Company at that time. The enthusiastic response to the original release of twelve songs – now known as Volume 1 – led to the subsequent releases of Volumes 2 and 3. And now, all three volumes are again available as fully digital downloads.